The Foppa Family's Palace, is located in the District VI Parione, bordering with the District VII Ponte. During the Renaissance Age, this area was characterised by the presence of lots of workshops where many artisans manufactured precious and other important metals to obtain thin gold leaves and various metal foils. That area was also known as Contrada del Trivio dei Parenti taking its name from a famous family that owned some important properties in the area, also known under the name of s. S. Biagio de Circlo, from a church situated near S. Maria della Pace, also called S. Biagio alla Pace or alla Fossa, that was afterwards destroyed in 1820.

In the XVI century, the square overlooking the Palace, called Piazza del Fico, became part of the possessions of a noble man, called Giovanni Paolo Foppa, who came from Bergamo to Rome as he had obtained the Roman citizenship. Piazza del Fico took its name by the presence of a fig tree therein.

Giovanni Paolo Foppa's son dedicated his life to the art, the reading, the writing meeting scholars and literary men that allowed him to transform his Palace, inherited in 1618, after his father's death, into one of the most important clubs and secure places for those who came to Rome from Bergamo. His wonderful Palace became a kind of accommodation for important literary people who came from afar. So even Francesco Nazari, on his arrival in Rome, was sent by the Archbishop of Bergamo John Barbarigo to Marc'Antonio Foppa's House, who admitted him to his famous meetings with many important people of that period: Michelangelo Ricci, Ottavio Falconieri, John Bona, the Prefect of the Vatican Apostolic Library Stefano Pignatelli, Lorenzo Magalotti and Cardinal Sforza Pallavicino. From these meetings came out the draft of the Journal de' Letterati (literary Journal). The magazine, founded by Nazari in 1668 and edited until 1683, published in many foreign languages and sent also in Europe.

In 1634 Piazza del Fico (Fig Square) was enlarged from Mar'Antonio Foppa and his brother, as you can read nowadays on the marble inscription on the building facade

MDCXXXIV' Marc'Antonio and I Baptist, foppa brothers, having bought and destroyed the houses around the square to create the space for roads, spending just our money, in 1644. Giovanni Battista Foppa, Marc'Antonio's brother, became co-heir of a considerable fortune (heritage) consisting in properties and bank accounts in Rome and in Bergamo.

He administered the inheritance with his brother until 1622, when he entered the Congregation Oratorio San Filippo Neri.

In 1643 he became Archbishop of Benevento and because of the distance, it was no longer possible to jointly administer the property. In 1658 it was divided and the house in Rome became exclusive property of Marc'Antonio.

In July 7th, 1673, Giovanni Battista Foppa died. Marc'Antonio became a tenant for half of the assets in Rome and in Bergamo. Also, Marc'Antonio died shortly after in December 18th, 1673 and according to his bequest, all the assets were assigned to the poor maidens of the parish of St. Biagio della Fossa incorporated with the parish of St. And St. Thomas in Parione Celso, administered by the Cardinal Vice-Chancellor pro tempore. 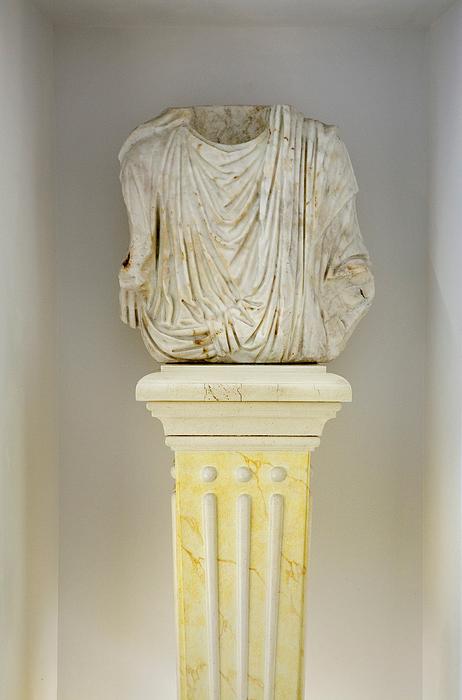 Opera Pia Foppa, still owner of the building in 1845, extended the Palace, at that time composed of 10 rooms on the first floor, 14 rooms on the second one, 12 on the third and 14 on the fourth. After that it became the property of Giuseppe de Rossi Mutarelli’s son, who lived in Via della Pace 35. Inside the building it is still kept the crest marble of Foppa Family, representing a hay rake in a hand and a cornflower in the center. The original colours were gold on a blue background. Unfortunately from the original furnishings of the Palace there have remained only some little fragments of frescoes and stained glass ceiling beams in some rooms, but the inventory drawn up at the time of Marc'Antonio Foppa’s death, was richly adorned with furniture, dishes, silverware, gold, paintings of religious subjects and various portraits, which together constituted a valuable collection.

Some of these paintings were made by famous artists like Correggio, Tiziano and Zuccari.